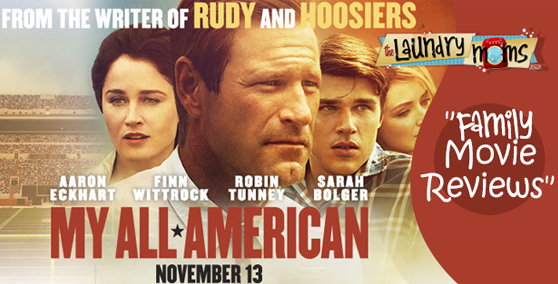 My All American is based on the true story of Freddie Steinmark (Finn Wittrock), whose passion, discipline and dedication playing high school football, earned a scholarship to University of Texas-Austin with legendary football coach, Darrell Royal (Aaron Eckhart). Freddie played for the Longhorns’ 1969 season before an injury revealed a tragic diagnosis which required his faith, courage and overcoming spirit, to lead his team to victory. Sarah Bolger plays his high school sweetheart Linda.

My All American was written and directed by Angelo Pizzo, who also wrote Rudy and Hoosiers. The PG is for mature themes told in this heartwarming biopic that focuses on Freddie, who overcame life’s tough challenges on and off the field, while leading his team to a championship. There are great football scenes, tearful heartwarming moments and an uplifting story of faith. Freddie’s legendary determination inspired all who knew him and he’s honored to this day with two large photos of Steinmark adorning the walls of the tunnel leading to the field at Darrell K. Royal-Texas Memorial Stadium where, seconds before each game, UT players touch one of the photos with the Hook ’em Horns hand salute. It is one of the university’s most respected traditions, shown at the end of the movie.

I highly recommend My All American for mature kids to adults!