In the world we live in today words like “Old Fashioned” seem to rarely be heard any longer, as well as chivalry, romance, or even courtship. It’s heartbreaking that a little movie you might have heard of called “Fifty Shades of Grey” can even be legal to be made in the United States of America, especially when it is more about dishonor, disrespect, and even violent physical abuse demeaning another human being.

As women we do long for a love story, but one so vastly different than what most Hollywood films are portraying. I believe John & Stasi Eldridge say it best in their book “Captivating“, “Your heart matters more than anything else in all creation. The desires you had as a little girl and the longings you still feel as a woman are telling you of the life God created you to live. He offers to come now as the Hero of your story, to rescue your heart and release you to live as a fully alive and feminine woman. A woman who is truly captivating.”

It is not often that a God honoring film about love and courtship is offered as a standard…a standard that is set apart for all the world to see. This week The Laundry Moms are honored to share with you a movie that will capture your heart and remind you what love is really about.

I don’t know about you, but I would love to see people come out in droves to put this little indy film in the lime light. Let’s make an impact where it counts…and teach the next generation that love looks anything but grey and a lot more “Old Fashioned”! 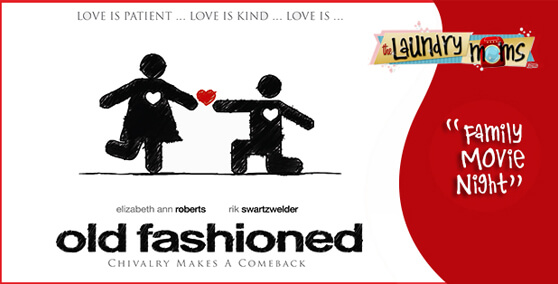 A romantic-drama, OLD FASHIONED centers on Clay Walsh, a former frat boy who gives up his reckless carousing and now runs an antique shop in a small Midwestern college town. There, he has become notorious for his lofty and outdated theories on love and romance as well as for his devout belief in God. When Amber Hewson, a free-spirited young woman with a restless soul, drifts into the area and rents the apartment above his shop, she finds herself surprisingly drawn to his strong faith and noble ideas, which are new and intriguing to her. And Clay, though he tries to fight and deny it, simply cannot resist being attracted to her spontaneous and passionate embrace of life. Ultimately, Clay must step out from behind his relational theories and Amber must overcome her own fears and deep wounds as the two of them, together, attempt the impossible: an “old-fashioned” and God-honoring courtship in contemporary America.

Here is the Great Cast & Crew Line Up!

***For Theaters Near You Check Out the Listings Here!