Most mothers believe their own children are destined for greatness. That is why I enjoy a film spotlighting a real life hero. The power of a dream, encouragement, and hard work all work in synergy to recreate everyday life into what history records as record breaking.

McFarland USA is about… 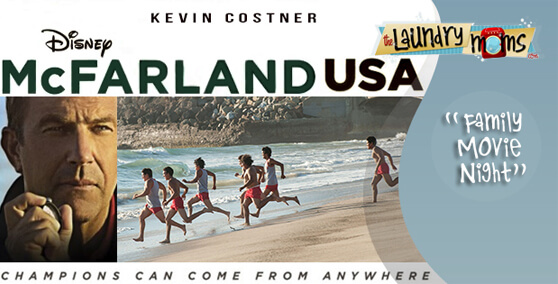 a modern hero who made an impact on the world around him – a poor farming community off the grid. Based on a true story, Jim White, an ordinary character, executed an extraordinary plan with an unlikely group of teens.

A Physical Education teacher on assignment, White first came up with the idea of starting a cross-country team in 1980 after noticing the natural talent of his students. Over the years, cross-country provided a ticket out of poverty to runners with talent who were willing to endure grueling workouts in the 100-degree-plus summer heat, after putting in hours of work in the fields with their families. Dozens of his runners accomplished college degrees and joined the armed forces. Several returned to work as teachers at local schools or guards in area prisons.

“Jim has inspired the kids here to reach for personal and career goals they never would have otherwise,” explains McFarland’s mayor, Manuel Cantu. “He’s got an integrity about him that the kids respond to, and it inspires them to move forward.”

White engineered a creative way to work with his students in summer workouts. After they had picked crops for many hours in the hot sun, he would meet them in the groves each evening for a run. No fancy track was available, so White would point in the direction he wanted them to run, then pedal his bicycle as fast as he could to keep up.

To the locals in McFarland (population 13,500), one of the California’s poorest towns, Jim White is a living, breathing legend. During his 20 years as the cross-country coach, Coach White’s teams won nine  championships. He transformed his community by training the young men on his team, mainly children of immigrant field workers, to run fast, work hard and dream of bigger things than picking almonds and avocados.

“I never set out to leave a legacy. I just always wanted to do the best I could do and let the guys understand that they need to try and always do the best they can do.” Jim White

Parents need to know that McFarland, USA is an inspiring sports drama about a Mexican-American cross-country team from rural California. Based on a true story, the movie stars Kevin Costner as the team’s coach, who’s determined to guide a bunch of farm workers’ kids into a team that’s good enough to compete in the state’s first cross-country championship. Although there are a few mature themes regarding class and privilege, as well as a couple of instances of fist fights, a possible suicide attempt, a knife fight that lands a couple of kids in the hospital, and a father who’s aggressive toward his family, there are also tons of positive messages about teamwork, cooperation, and community. Coach White isn’t perfect but means well and is devoted to his runners, and the portrayal of the students and their families is nuanced and uplifting — most of the boys have hardworking, loving, intergenerational families.