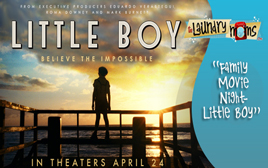 LITTLE BOY is the heartwarming story about a young boy who discovers he has enough faith to bring his father home from war. Jakob Salvati is amazing as ‘Little Boy’, Emily Watson, Kevin James, David Henrie, Tom Wilkinsin and Michael Rappaport also star.

Set in the 40s during WW II, the story is seen through the eyes of a 7 year old boy and has an old fashioned Norman Rockwell look and feel of the way America used to be – both culturally and morally. This role was a first for Salvati who gives an incredible performance that will touch the hearts of all ages and present a unique parable of faith, from a child’s perspective. Themes about sacrifice, family, friendship, prejudice and having a childlike faith in the midst of life’s difficult circumstances, make this a drama-adventure with comedic moments all the way through. This is a beautiful looking film with a story that will stir your patriotism and renew your faith! Its heartwarming messages about child-like faith, a boy’s love for his father, forgiveness, tolerance and sacrificial love, will capture your heart and lift your spirits. Little Boy is one of the best family films for all ages!