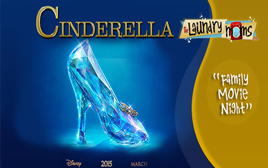 For generations “Cinderella” has been a familiar story to girls and boys of all ages. Young Ella’s father marries Lady Tremaine and gains two obnoxious stepsisters– her father unexpectedly passes away leaving her with a broken heart and doing servants work for her step-mother and sisters who mockingly call her Cinderella. Despite her misery, Cinderella clings to her mother’s dying words – “have courage and be kind.” After a chance meeting with a handsome stranger in the forest, a ball is held for all eligible ladies in the Kingdom to meet the prince but Cinderella is told she can’t go and the rest is what fairy tales are made of…Lily James, Cate Blanchett, Richard Madden and Helena Bonham Carter star

Disney does it again! They took their animated version and made it come alive under the direction of Kenneth Branagh. The movie is beautifully filmed, has incredible sets and costumes – exquisite sparkling glass slippers and a gorgeous bright blue ball gown that every girl (young and old) will want! And the magical transformation from a pumpkin to a carriage, complete with footman and coachmen, is very creative!

James and Madden make a perfect royal pair – Blanchett gives a classic performance adding a new dimension to the typical wicked step mother role – and I enjoyed the positive dialogue for kids that constantly refers to courage, kindness, love and giving forgiveness.

There’s nothing questionable in Cinderella and I’m quite sure it will become a classic – it’s a perfect movie for the child in all of us that loves to be entertained with fairytale magic!