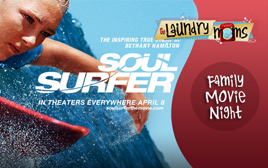 Last Summer this Movie was THE HIT of Family Movies in the theaters and this Sumer it’s worth watching at home! If you missed it be sure and rent it or add it to the family library! We can not always control our circumstances, but this movie shows that we can control how we deal with those circumstances! Check out the trailer below! 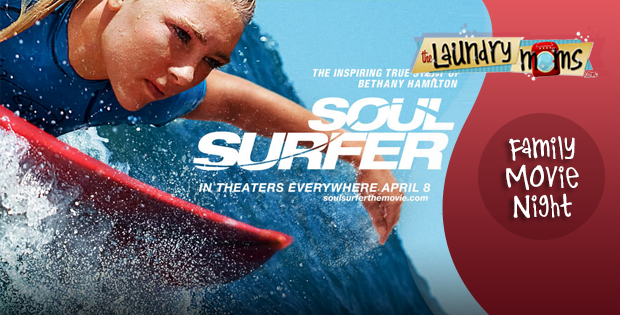 SOUL SURFER is the inspiring true story of teen surfer Bethany Hamilton, who lost her arm
in a shark attack and courageously overcame all odds to become a champion again, through her
sheer determination and unwavering faith. The film features an all-star cast, including
AnnaSophia Robb and Helen Hunt, with Carrie Underwood in her film debut, and Dennis Quaid.
In the wake of this life-changing event that took her arm and nearly her life, Bethany’s feisty
determination and steadfast beliefs spur her toward an adventurous comeback that gives her
the grit to turn her loss into a gift for others.

Buy it Here in iTunes, Amazon, or Rent it in Flixster!

Did You Know?
Why is tragedy allowed in our lives? And what does God have in mind for us when it strikes? Bethany doesn’t know the answers to those questions. But she shows us that even in our ignorance we can have the assurance that He isloving. And that He does have a good and perfect plan, even when it doesn’t make sense to our tear-soaked hearts and minds.

Before her injury, Bethany’s youth group leader, Sarah, shares with her Jeremiah 29:11. The verse becomes an anchor for the teen as she gamely faces her new future. Clinging also to Philippians 4:13, she perseveres, and with time and greater perspective she realizes how little she has suffered in comparison to others. While in Thailand on a summer missions trip, for example, she helps people who have lost many of their loved ones and most of their village to the 2004 tsunami.

There, a poignant moment has her teaching a very young, orphaned boy how to overcome his fear of the water and learn how to ride a surfboard. And speaking of summer missions trips, they get a pretty significant plug in Soul Surfer. They are shown to be a big part of the Hamilton family’s mindset, and are by extension promoted as life-improving ventures—for both those who are ministered to and those who do the ministering.

Elsewhere, Bethany publicly thanks Jesus Christ for giving her courage. We see her attending her church’s youth group. And at a church service the praise chorus “Blessed Be Your Name” is sung. Believers pray before meals. Bethany’s anxious dad reads a Bible while at her hospital bedside.

A note about a few of the specific symbols of Christian faith in this film: The Jeremiah reference was for a time removed during editing. But when Carrie Underwood, who plays Sarah Hill, reportedly asked the filmmakers to “tell the story” fairly and accurately by preserving both the verse and its reference, they listened. Deemed too conspicuous and “prop-like,” the words “Holy Bible” were also digitally removed from the cover of Bethany’s dad’s Bible. (Most Bibles these days don’t have much on the front.) But after Tom Hamilton e-mailed a photo of his own Bible—emblazoned with big text similar to that on the Gideon’s Bible used in the scene—the words were reinstated. Hamilton told The Hollywood Reporter, “I could see the words bright and clear. I looked at my wife and whispered, ‘Thank you, God, they put it back.” 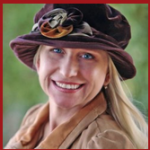