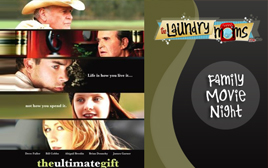 The Ultimate Gift is actually one of our all time favorite family movies! We read the book a few years ago and when we found out they were making a movie we were giddy with excitement! This movie has some of the most valuable insight’s into teaching character within the family. It will be one of those DVD’s you will want to have in your family library to watch again and again! Unfortunately it’s not available in Netflix or at the local Red Box, but you can rent or purchase “The Ultimate Gift” in iTunes! 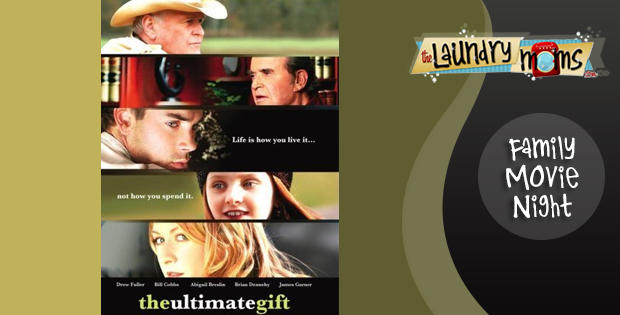 Jason thought his inheritance was going to be the gift of money and lots of it. Was he ever in for a big surprise. Based on the best-selling book “The Ultimate Gift” by Jim Stovall, the story sends trust fund baby Jason Stevens on an improbable journey of discovery, having to answer the ultimate question: “What is the relationship between wealth and happiness?” Jason had a very simple relationship with his impossibly wealthy Grandfather, Howard “Red” Stevens. He hated him. No heart-to-heart talks, no warm fuzzies, just cold hard cash.

So of course he figured that when Red died, the whole “reading of the will” thing would be another simple cash transaction, that his Grandfather’s money would allow him to continue living in the lifestyle to which he had become accustomed. But what Red left him was anything but simple. Red instead devised a plan for Jason to experience a crash course on life. Twelve tasks, which Red calls “gifts,” each challenging Jason in an improbable way, the accumulation of which would change him forever.

There is no nudity in the film. Jason’s former habit of casual sexual indulgence is mentioned in one scene. In another an ex-girlfriend unsuccessfully attempts to seduce Jason.

The most disturbingly “violent” scene involves a traumatic, dysfunctional-family holiday dinner [Note: writers attempt at humor]. A homeless person tries to snatch a purse from a woman in the city park. Though not graphically violent, characters are beaten, starved and thrown into primitive prisons. Drug lords use violence and guns. Themes of death, loss, and terminal illness are brought to the viewer’s attention.

“Screw you,” “hoser,” and “shut up,” are the harshest words you will hear. This film is about as clean as they come out of Hollywood.

Characters are shown drinking wine at more than one dinner occasion. Jason drinks a glass of wine at home alone. Jason and his grandfather’s lawyer share a glass of brandy at the older gentleman’s home. Jason becomes slightly intoxicated after drinking a fermented concoction with natives at a celebration for the library dedication. Drug lords become drunk and invite prisoners to drink with them in celebration of Christmas.

We enjoyed the book so much we decided to give them out as Christmas Gifts the year it came out! The Story Line from the movie does follow the book closely!

Red Stevens was a self-made man who gave his family everything – and ruined them in the process. Now, as his estate of mega companies is divided among greedy and self-serving relatives, one member is singled out for a chance to do something special: Red’s great-nephew, Jason.

The Ultimate Gift takes the reader through Jason’s incredible work to gain his Uncle Red’s inheritance through a series of challenges. Every step of the way, there is a lesson for Jason and the reader. It’s a quest for what it means to live life well that has captivated millions of readers throughout the world, and has also become the basis of numerous educational and philanthropic initiatives that build upon the inspiring insights that unfold in this stirring story.

This film is rich with spiritual treasures. These are some of the gifts offered in The Ultimate Gift:
• If you love your work it’s not a labor.
• Money is simply a tool, not a goal.
• True wealth is measured by one’s friendships.
• We learn through life’s trials, we grow through pain.
• Life’s problems teach us how to use good judgment, which in turn teaches us how to avoid life’s problems.
• Every family, no matter how dysfunctional, has value.
• Laughter is the soul’s medicine.
• Faith can make our dreams realities.
• We gain most when we give ourselves in service to others.
• Gratitude comes from recognizing what we have, not dwelling on the things we lack.
• Living in the present and taking time for the people we cherish, is the formula for a perfect day.
• Love is the greatest treasure. We gain it by giving it away.

Fox has several discussion guides available for you to download on faith, inspiration, and teaching children!