Don’t you just love it when your sitting on the edge of your seat anticipating what in the world is going to come next as the story unfolds right before your eyes on the big screen!!!

Well get ready… ’cause it’s time for a little action adventure this week with our Family Movie Night here on TheLaundryMoms.com as we feature “Jerusalem Countdown”! 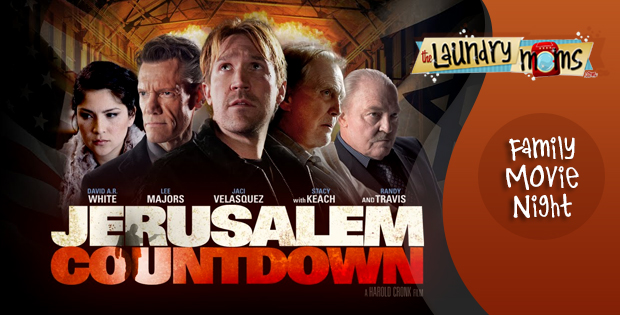 With the Middle East in turmoil, Israelʼs preeminent Ally is thrust into an impending war— America is now the target as the battle for Jerusalem begins. Adapted from the Best Selling Book by Pastor John Hagee, JERUSALEM COUNTDOWN highlights the reality of an inevitable conflict between Israel and Islam. When nuclear weapons are smuggled into America, Senior FBI Agent, Shane Daughtry (David A.R White) is faced with an impossible task—find them before they are detonated. The clock is ticking and the only people who can help are a washed up arms dealer (Lee Majors), a retired Agent (Stacy Keach) and a by- the-book CIA Deputy Director played by Randy Travis. Nuclear holocaust on American soil threatens global stability and the impending destruction of the world is coming to fruition, in this film of international terror and suspense. Also featuring Nick Jameson, Jaci Velasquez, Marco Khan, Carey Scott, and Anna Zielinski.

Check Out the Trailer and get ready for a Wild Ride!

Jerusalem Countdown is on DVD and is available on iTunes, Netflix, or at your local movie store!

The prelude to Armageddon has begun…

( couple of scenes in a bar) talking and drinking some kind beverage in a cup. One scene involves a man and a women injecting 1 man with truth serum unleast 1 time each.

A lot of shooting of guns/ people getting shot and killed, injecting of needles, one airplane and one car explosions. Rapture scene is some what intense.

Definately 13 yrs and up( Reccomended)