Have you ever just sat numbly in the movie theatre and watched the credits roll after a movie has powerfully touched you in the deepest part of your heart? That’s what happened after we watched “The Book Thief”, this weeks featured Family Movie. There are no words to describe how blessed we are, and how many things we take for granted in our everyday lives. Take your older children to see this moving film to help them realize we live in a world where we can make a difference in the lives of others, and it will inspire them to see beyond themselves and into the hearts of those around them who otherwise might seem invisible.

Don’t Miss the Trailer! …This is a Must Watch Movie! 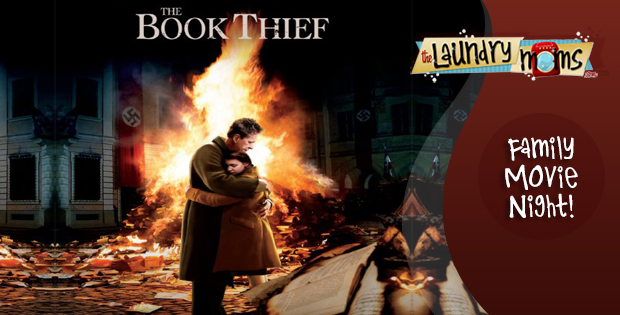 Synopsis:
Based on the beloved bestselling book, The Book Thief tells the inspirational story of a spirited and courageous young girl who transforms the lives of everyone around her when she is sent to live with a new family in World War II Germany.

Dove Worldview:
This movie soars as it demonstrates the best in humanity which stands up to the worst. Set during World War 11 young Liesel (Sophie Nélisse) is adopted by a man and woman named Hans and Rosa (played wonderfully by Geoffrey Rush and Emma Watson). Nélisse is brilliant as the young girl who has a compassionate heart. When Hans and Rosa take in a Jew named Max (Ben Schnetzer) he is carrying a book and sick due in part to hunger. Liesel is curious and begins asking him questions and they form a friendship which grows during the time he is with them. Hans had begun teaching Liesel to read and soon Max is helping her as well. She becomes his eyes when he has to hide in the basement for a long while and she describes the weather outside. Liesel also develops a strong friendship with a boy her age named Rudy (Nico Liersch) who keeps telling her that one day he is going to kiss her.

In an interesting subplot Death is the narrator (voiced by Roger Allam) and kicks off the movie by reminding the viewer that it is a fact that everyone is going to die and he adds, “You’ll meet me soon enough.” And to a great extent that is what the movie is about, about some of the people close to Liesel dying and the horrors and atrocities of the Holocaust including the book burnings. It is a bit of a downer in a few spots but definitely offers hope by film’s end. The compassion shown during the movie is praiseworthy. For example, Liesel sees German soldiers leading captured Jews away and she rushes over to them to tell them, “I won’t forget you, I won’t forget you.” There are some harsh moments with Hitler’s soldiers mistreating people in addition to the sophisticated war theme so we are awarding our Dove Seal to the movie for ages twelve and above. It also includes brief language. This film shows the bad side of humanity but how that good matches it and goes even beyond. We see Liesel steal books in order to satisfy her desire to read but she also returns them when she can. When Max gives her a journal to fill its blank pages she is soon writing about her deepest feelings. This leads to a memorable future. This is a good one to see with someone you care about or a World War 11 buff. Kids over twelve will enjoy watching Liesel and Rudy as they may well become their heroes.

Content Description:
Sex: A girl kisses a young boy after he has passed on.
Language: H-2; G/OMG-4; Some kids call others dummy in German.
Violence: Some people are kicked and shoved and punched and pushed over; air strikes; explosions; windows are broken; a truck is knocked on its side by an explosion.
Drugs: A bottle of wine is seen; a character drinks briefly from a bottle.
Nudity: Drawing of man from the side on the cover of a book and he appears nude but nothing graphic is shown.
Other: A strong Anti-Semitism including school songs with some of the German people and this includes a class singing songs against Jews and they won’t be happy until they no longer exist; death and grief; a boy’s nose bleeds and he is obviously dead.