One Night with the King is a classic Bible story told in the most beautiful depiction on the big screen! This timeless story  is an adaptation of the Old Testament story of Esther that follows a young Jewish orphan who against all odds becomes Queen of Persia and saves the Jewish race from destruction. This movie will inspire your family to take a stand for God and His Kingdom…Don’t Miss this Week’s Family Movie Night!

Be Sure and Watch the Trailer Below! 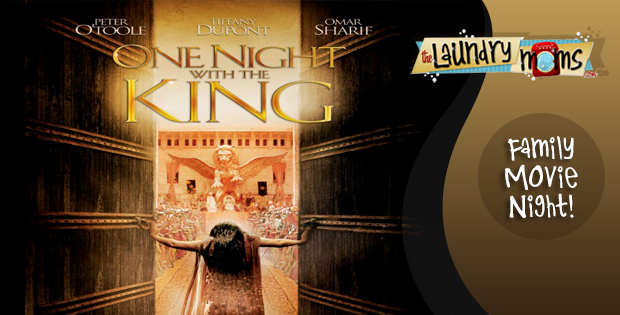 The great allure of the story of Esther is that it is one of rich complexity, working on multiple levels—heart-wrenching love story, grand adventure and ultimately a lone girl against an empire in a plot that plays out like it was dreamt up in Hollywood. But beneath all this is a genuine exploration of hatred, racism, revenge, courage and redemption.

For the reality is that before there was Hitler, there was Haman the Agagite who very nearly brought about a total Jewish holocaust 2,500 years ago. And before there were Schindler and so many other Jewish and non-Jewish heroes celebrated in modern films, there was a little Jewish orphan who saved her people from destruction. It is an epic story that can be boiled down to one simple theme…If this orphan, minority girl, a foreigner, could change her world, there’s hope for all of us.

The movie is based on the best-selling novel, Hadassah: One Night With The King by Tommy Tenney and Mark Andrew Olsen. It stars silver screen legends Peter O’Toole and Omar Sharif, along with the John Rhys-Davies, Luke Goss, John Noble, Tommy “Tiny” Lister, James Callis, Jonah Lotan and Hollywood newcomer Tiffany Dupont.