The Laundry Moms movie pick of the week is a true inspiration for us mommas!

this courageous tale of one mom who just wouldn’t quit! 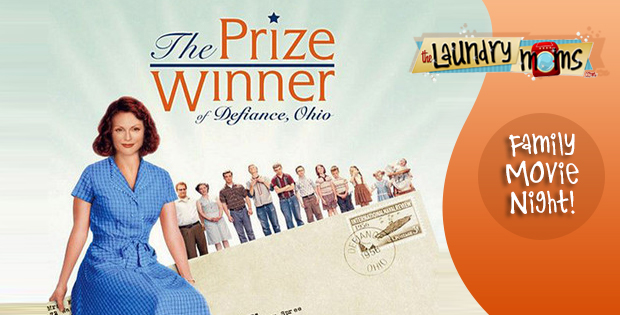 Evelyn Ryan (Julianne Moore) was a woman of intelligence, talent, and pluck living in the small town of Defiance, OH, in the 1950s. Evelyn was married to Kelly Ryan (Woody Harrelson), a man who gave her ten children but not much else; Kelly had a severe drinking problem, struggled to hold on to a job, and tended to spend his money as soon as he earned it. It was seemingly up to Evelyn to support the family, but with ten kids to look after, taking a job outside the home hardly seemed practical. But the resourceful Evelyn discovered a way to bring some extra money into the household – at a time when a number of companies held contests to find new advertising jingles for their products, Evelyn had a genius for coming up with slogans and winning contests, and for the better part of a decade Evelyn kept food on the table and a roof over her head by dreaming up jingles, tag lines, and ad headlines and winning contests with her handiwork, often selling the merchandise she won to pay the bills.

(When he’s drunk and banging up her new freezer after his baseball team loses… TURN IT ON MUTE!!!! 🙂