This little emerald bauble deserves a second look from moms and dads.Based on a Wizard of Oz sequel written by Roger S. Baum, this is a fun animated yarn voiced by a cavalcade of recognizable stars. Its rambunctious good-vs.-evil tale is populated with kid-friendly marshmallow soldiers and sentient saplings. And even its darker moments are brightened up by Martin Short’s bad-guy-with-a-touch-of-silly delivery. There are sunny songs to hum along with. Sad moments to sigh over. And a happy ending that exchanges yesterday’s wispy wishes somewhere over a rainbow for a smile-worthy dose of loyal friendship, solid choices and working together for the common good. 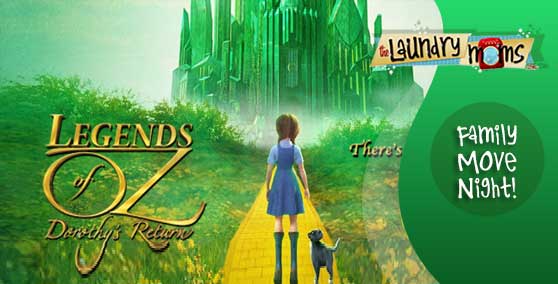 Legends of Oz: Dorothy’s Return is a 3D-animated musical based on the adventure books by Roger Stanton Baum. A continuation of one of the world’s most popular and beloved fairy tales, Legends of Oz finds Dorothy waking to post-tornado Kansas, only to be whisked back to Oz to try to save her old friends… the Scarecrow, the Lion, the Tin Man and Glinda from a devious new villain, the Jester . Wiser the owl, Marshal Mallow, China Princess and Tugg the tugboat join Dorothy on her latest magical journey through the colorful landscape of Oz to restore order and happiness to Emerald City!   The Cast Includes: Dan Aykroyd . . . Scarecrow (voice) James Belushi . . . The Cowardly Lion (voice) Martin Short . . . The Jester (voice) Kelsey Grammer . . . The Tin Man (voice) Lea Michele . . . Dorothy (voice) Oliver Platt . . . Wiser the Owl (voice)

Check Out the Trailer Here:       Get your Tickets Here!