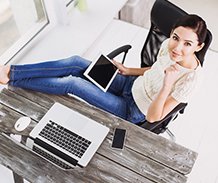 We’ve all had those messy hair don’t care, I’ve been wearing the same clothes for 4 days, when did I last shower weeks, am I right? Sometimes those weeks turn into months though and eventually you start to feel as frumpy as you look and it can affect your mood. Believe me, I get it. I’m a homeschool mom of three littles and it is just easier to stay in pjs for most of the day and not brush my teeth until noon (okay not daily but there are days!). I find when I get into slumps like that though, I start caring less and less about my appearance and then more garbage food makes it past my lips because who cares anyway?

One way that I’ve been changing that is…

By getting dressed, washing my face, brushing my teeth, and putting makeup on early on in the day. I no longer wait until 4 pm to get ready because I have an appointment out of the house and I don’t want to look like a savage. I do in part to honor my husband by at least resembling the woman he married, and also to honor myself. When I take pride in my appearance it affects many other areas of my life. I feel more confident, I stand up taller, I smile more, etc. If someone comes to the door unexpectedly I’m no longer afraid to answer it. When I feel good about my appearance, I care more about what I’m putting into my body. When I make an effort outwardly, I make an effort inwardly as well.

I will make a point to say that I am very careful about what I put on my face as makeup is one of the worst offenders for toxic ingredients and women slather it on daily. I’ve switched to a completely plant-based makeup line which is amazing for the skin and looks sooo good. Everything from primer to mascara to the finishing spray is made up of all plant-based, completely natural ingredients so I can feel good about what I’m putting on my face. Trust me, when you go through something like cancer it makes you take a hard look at everything you’ve been using liberally on your skin and causes you to wonder if you inadvertently contributed to your own diagnosis.

That being said, I think it’s important to make an effort to get dressed in something other than sweatpants, and do a little something with your hair and face. I am not at all opposed to a messy bun, I think done right it looks awesome! That requires actually taking it out of the messy bun you woke up with though…

I know that it’s not going to happen every day but I bet if you make an effort a few times a week that it will actually improve your mood, your confidence, and your ability to stay on plan. Just a thought…

If you want to learn more about the plant-based makeup line I mentioned above or any of the new products that just came out, we are doing a live class tomorrow night on Facebook. We’d love to see you there! Join our class group here.