Confessions of A Prodigal Son 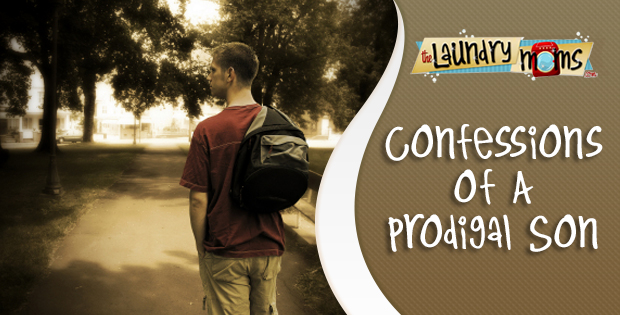 The Prodigal Son: A story that undoubtedly strikes fear into the hearts of parents everywhere.

The Prodigal Son is the story of a wayward son who demands his inheritance early, and ends up leaving his home and squandering his money on everything from sex to gambling. The prodigal eventually finds himself broke and in the dirt with memories of home running through his mind. It is then he decides to return home, beg for forgiveness and maybe find a job as just a servant in his father’s household. But, upon his arriving home, instead of finding bowed heads of disappointment, he finds a feast and celebration in his honor and the loving embrace of his forgiving parent.

I think this story is one we can all relate to, whether you are the prodigal, OR the mother (or father) of one-The Prodigal Son is a story that will speak to almost anyone living in this fallen world.

That being the case, over the years I have heard countless people dissect, teach and react differently to this story. Naturally different people focus on different aspects of the story as it pertains to them:

– As parents, I’m sure the immediate inclination is to ensure that it never becomes a reality for their children.

– As pastors and teachers, I’m sure there is a need to show the detriment of selfish desires and sinful living.

– But as a son, who has been a prodigal once or twice in his life, my interest lays in something different.

What pulls the Prodigal home…

I want to see the voice that spoke inside of the prodigal-the one that when the wayward son felt the most down and out, called him home. I want to know why he listened to it. Why is the wayward son suddenly willing to humble himself to the lowest position just for a chance to be back in his parents’ care?

I think back and remember the times in my life when I found myself surrounded by the consequences of my poor choices and willful rebellion, trying to recall what it was that called me home.

As I ponder and remember the sound of the song that guided my steps into redemption, grace comes back to me. The driving force to my return to the straight and narrow wasn’t the facts or teaching on rebellious living I heard a thousand times in church. It wasn’t the countless warnings of sin (then too late to be applied, anyway).

Instead, it was something so much more personal, real and tangible.

It was the song of my home that would play in my ears as I would sit with my head in my hands, trying to find the light in a dark situation. It was remembering the warm embrace of a loving family and an inviting home. It was the grace I knew my mistakes would always be met with. It was the warm meals, good conversation and the personal connection I missed with the ones I loved. It was the beauty of what home was truly meant to be.

Essentially, my reason for choosing to leave my prodigal tendencies in the past, to return home to my loved ones, was having loved ones and a home worth returning to.

There is a Biblical picture for this that God paints masterfully throughout the bible.

After all humanity (you and I) decided to live its own way and rebel against the way life was meant to be lived (as Prodigals). God first decides that instead of just getting rid of us, He wants us to have a chance at redemption by forgiving us.

But he doesn’t stop there. The way God redeems us and shows us forgiveness is by giving us a chance to have a personal relationship with Himself!

But then He goes on and creates a place for us to come home to, a beautiful perfect place where there will be “No more tears”.

God looks down on you and me, after our display of rebellious independence, and calls us home to a loving embrace of a parent and a perfect vision of home…Heaven.

So as parents, the question I have for you, is NOT,

What are you doing to create a home in which a prodigal would feel the need and freedom to return home?
Just as a heads up, all of us sons will fall short, we will rebel and we will, in at least some sense of the word, make our selves prodigals.

BUT  if you are diligent in making a beautiful home, and a place that will call us back to who we are meant to be, the same song God sings to all of us, we will return to your loving arms of redemption, without fail.

Right now Nathan Clarkson (the author of this post) is creating an original film Confessions of a Prodigal Son. A story told as a modern retelling of the classic bible story The Prodigal Son. But he needs your help to make it happen! To jump on board and get involved in this project that will have the power to be a light to a dark world and call prodigals home visit www.ConfessionsOfAProdigalSon.com, and check out the trailer below!

(as originally seen on The Mob Society-Thank You!)

—
Nathan grew up the Son of two popular writers, speakers and visionaries as one of the “Clarkson kids”. Nathan learned at an early age that God had called him to use his gifts to help bring light to a dark world. Nathan has a passion for acting/music/writing/directing/producing/and anything creative that can connect with peoples hearts. Nathan went to the New York Film Academy before he moved to Los Angeles pursuing his dreams of becoming an actor/musician/writer. Nathan has already seen Gods hands open amazing doors allowing him to have small parts in TV shows, commercials and even a role on a major movie! Nathan is currently in the midst of producing and staring in his first film, and attends Oasis church on the weekends. Nathan lives in the heart of North Hollywood and would love to hear from you!

for this timely message on prodigal children!

on how you have learned to give grace during this journey with a prodigal child!