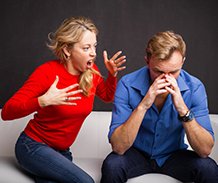 Communication is crucial with your children, in your marriage, and honestly, in every aspect of your life. When you have communication, you’re going to have conflict. There are probably topics that you and your spouse or you and your child avoid. You know that if you talk about that, you will end up in an argument or in silence. What you may not realize is that the place that you cut off communication is the place that is holding you back. It’s crucial that you learn how to do conflict resolution and stay in the will of God.

As we move forward, I will correlate these tactics to a spouse relationship, but these principles apply to any kind of conflict— business, friendships, and the one between you and your child.

What type of communication pattern do you fall under?…

This person will avoid conflict at any cost, which usually means consenting to whatever their spouse says and shutting down the conversation as quickly as possible. They smile and reply, “Whatever, dear, whatever. It’s okay. I don’t even care about that anymore.” They just want things to be happy, and the easiest way to do that is to ignore the problems. They do not share their feelings effectively.

My husband says about himself, “I’m a surrenderer, but I don’t surrender easy!”

The problem with this communication type is that although they don’t say anything, they harbor resentment from that conflict inside, and eventually it will spill out. They sacrifice expression to avoid conflict. Their spouse will also resent them for not caring enough about the relationship to talk things out.

This person pulls away from conflict and refuses to communicate. Instead of giving up and giving in as the surrenderer does, this person pulls away and shuts off. They give their spouse the silent treatment to avoid confronting the problem. This communication type is often manipulative. They don’t want to discuss their feelings, but they silently view themselves as right and the victim in the situation. They tend to fall into the controlling and self-righteous category, which makes their spouse feel insecure and abandoned.

This person leads the argument and bulldozes over their spouse’s feelings. They keep pushing their point, saying it in a different way, and going around the topic until their spouse surrenders. They’re not just a fighter; they fight to win.

When two fighters are married, small discussions can turn into fireworks, because neither one will relent their point until they’re the victor. Fighters are also easily irritated with people who withdraw or surrender in arguments because they enjoy the confrontation.

I am a fighter. I have to make an extra effort to let Gary say what’s on his mind when we’re having a discussion because otherwise, he gives up on the conversation and surrenders. One time he said to me, “Drenda, I can never win an argument with you because you have more words than I do. You’re always going to come back with a new angle.” This communication style causes others to feel unimportant, suppressed, and ultimately resentful.

Which one of these flawed communication systems do you lean toward? Which one does your spouse?

If you’ve been married for very long, you know how a discussion with your spouse is going to play out, don’t you? If you’re a fighter, you know when your spouse is going to finally withdraw or surrender. You count on the fact that if you can talk long enough, or go far enough, you’ll get what you want out of the conversation. Nobody wins that way, though. Nobody wins with any of these confrontation tactics.

We use these same communication styles in parenting our children, which is why we don’t often get very far. Because Gary and I travel frequently, we observe parental dysfunction all the time in airports and on planes. For instance, as one of our flights was getting ready to taxi out for takeoff, suddenly two-year-old Bentley began kicking my seat from behind.

His mother is a surrenderer, and as a result, her son controlled her. I heard her say, “Bentley, stop that.” Th e kicking did not stop, then again, “Bentley, stop that. Th ere’s a person in that seat, and we don’t know who it is.” Well, they may not have known who I was, but I knew who Bentley was.

Next, Bentley started the fake crying routine! Screaming, crying, and making the point that he was in charge.

Bentley picked up the volume a few notches, and the now desperate mother pleaded, “Bentley, do you want some candy?”

When Bentley paid no attention to her off er, the flight attendant came quickly down the aisle and offered young Bentley a cookie. Miraculously, Bentley stopped screaming, said yes, and actually started laughing with his first bite.

As I sat there, I couldn’t believe what I was hearing. He likes it? Bentley did not need a negotiator; he needed a parent. All she needed to say was “Be quiet.” Then when he started his screaming performance to protest, she could have taken him to the bathroom for a spanking, or if that was impossible, she could have done what Gary did on rare occasions with our children when we were out in public—he would reach over and give them a quick pinch on the back of the leg. I didn’t necessarily like it, but it worked! We could take our children anywhere and they behaved.

Gary would have then said, calmly, “Bentley, I said stop.” If Bentley still persisted, another pinch would have reinforced his authority, and he would have calmly repeated his command. It would not have taken too many pinches for little Bentley to know that he could not act that way. Children often use the public setting to assert rebellion because they feel they can. This becomes a pattern he will repeat!

The mother’s surrender only made Bentley more demanding and more difficult to handle. The surrendering communication style is one of the communication styles learned after the Fall in the garden. Some parents withdraw, not speaking to their children for days, and others fight and are verbally and sometimes physically abusive. However, we don’t have to communicate using any of these destructive methods. It’s our choice. We can team up with God and step into a new kind of communication and love, and that kind can radically transform our relationships.