Becoming the Woman of His Dreams

“And they lived happily ever after.”

Wait a minute. Isn’t that supposed to be the end of the story, rather than the beginning?

Well my friend, I think that has been the problem in our marriages all along. To have a great marriage, we must begin with the hoped-for end in mind. Every word we speak, every decision we make, and every action we take will either move us closer to or further away from that end. And as wives, we have the opportunity to play the leading lady with the starring role in the grand drama of marriage by becoming the woman of our man’s dreams.

So what does it take to become the woman of your man’s dreams? In order to answer that question, I interviewed and surveyed hundreds of men to find out what they longed for. As I compiled their responses, I noticed seven qualities of the dream wife that kept coming up time and time again.

Let’s take a look into the hearts of men… 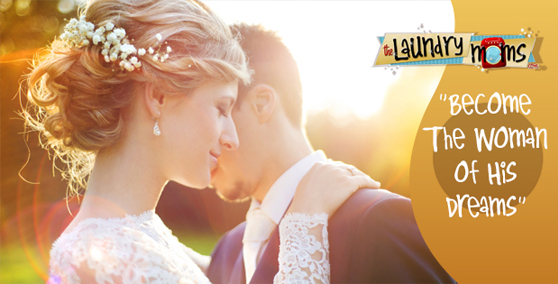 I remember sitting in front of a mirror on my wedding day, staring at the reflection of a woman so full of hope and promise. I was overflowing with love for this man of my dreams who, in just a few moments, was going to be my husband…forever. Then my musing took a twist. Doesn’t every bride feel this way about her groom on her wedding day? What causes fifty percent of marriages to end in divorce? What could possibly mar this beautiful union?

Staring at myself in the mirror, I made a commitment that when I said the words, “I do,” then “I would.” I made a promise to God, to my husband, and to myself, that I would do everything within my power to make our marriage a “success.” I quickly learned that “in my power” was not enough. I had to depend on God’s power working in and through me to be the wife my husband needs. One of the most important things we can do for our marriages is to pray for our husbands and our roles as wives. And while prayer was not the number one response of the men on the surveys, we cannot accomplish the following six without it. Prayer is where a great marriage begins.

“I’ve been shut up, shut down, shot down, ridiculed, disregarded, overlooked, overbooked, and overwhelmed…I know I was made for a reason. I know that, in God’s eyes, I count. So, I simply want to find someone who believes in me.”

No, these are not the lyrics from the latest country song, but the words from one of my survey respondents. It appears Aretha Franklin isn’t the only one wanting a little R-E-S-P-E-C-T these days. The longing for respect was very high on a man’s wish list and we shouldn’t be surprised. In the Bible, Paul wrote to both men and women about their various roles in marriage. “Each one of you [men] also must love his wife as he loves himself, and the wife must respect her husband” (Ephesians 5:33). Just as a woman longs to be cherished and loved, a man desires to be respected. It is one of the most precious gifts a wife can give.

Webster defines respect as the “special esteem or consideration in which one holds another person.” We show respect by supporting his decisions, speaking highly of him to others, valuing his opinions, fulfilling his requests, honoring his leadership, and appreciating his provision.

It was a beautiful sunny day in Peoria, Illinois when Jill surprised her husband with a day full of birthday treats. It began with breakfast in bed and continued with a stack of note cards tied with a red ribbon.

Through laughter and tears, Jeremy read twenty-five cards aloud. Each became a jewel in his birthday crown. Jeremy’s birthday continued with surprises, and at days end he cupped Jill’s face in his hands and whispered, “You love me so much.”

One of a husband’s greatest longings is to be adored, admired, and appreciated by the woman of his dreams. And if those needs are not being met at home, he will seek elsewhere. He may go to work to hear “job well done,” to the ball field to hear, “way to go,” or even back home to momma to hear, “I’m so proud of you son.” But where he really wants to go to be adored is through the front door of his own home.

I still remember the television commercial with men gathered around a campfire with their favorite drink in hand. Men laughed and slapped each other on their backs as the announcer said, “It doesn’t get any better than this.” But according to the men in my survey, it does get better than that. What men really want is to have fun with their wives.

During the dating days, couples focus on getting to know one another and having fun together. But somewhere between paying the mortgage, cutting the grass and taking care of the kids, the fun aspects of marriage get taken out with the trash. So how do we change that? We become very intentional and create commonalities. Find something that you enjoy doing together, learn how to communicate effectively, and make time for fun. Then as he lays his head on the pillow after a fun-filled day with the woman he loves, you might hear him say, “It doesn’t get any better than this.”

One area that is very tender to your tough man’s heart is that he wants the woman of his dreams to place him number one above every other human relationship—above parents, above their children, and above all others. She safeguards her marriage against forces that wedge their way between her and her husband and she stands sentry to protect their relationship against anything that would pry them apart. The woman of your man’s dreams lets him know that he is second only to God.

A man wants to know that he is still King of the castle no matter how many little princes and princess are vying for mom’s attention. Craig’s response was echoed throughout the men’s responses: “I wish my wife understood my need to be her first priority, after God and before the kids or other outside interest.” He may never say these words aloud, but they are most likely hidden in his heart.

There is much in print today about low self-esteem in women. However, I see that same problem in men. They are less likely to expose or admit their need for encouragement, I believe, because it goes against the world’s idea of masculinity. Men are taught to be tough, have thick skin and not need kind words. But they long to know someone believes in them.

Our men may never tell us the wounds that were inflicted on them as children by ill-spoken words. “You are such a slob.” “You’ll never amount to anything.” “Why can’t you make good grades like I did when I was in school?”

A husband may never tell his wife about hurtful words that were deposited in his memory bank, but I’d bank on the fact that such comments are in his account—perhaps locked away in a safe deposit box where no one can see. We may not be able to withdraw them or erase them, but we can deposit enough encouraging words to counterbalance and negate the bad. The woman of your man’s dreams lets him know that she believes in him.

While this may be the last section in this article, you can be sure it was his first response. From the surveys I collected, sexual fulfillment was right at the top of the list, running neck-and-neck with respect. A wife can excel in praying for her husband, respecting him, adoring him, initiating intimate friendship with him, safeguarding her marriage, and encouraging him, but if she neglects sexually fulfilling him, all her efforts will fall short. Sexual fulfillment, not accommodation, is the glue that holds all the other elements together. It is not just the glue of marriage, it is the superglue.

If you look back at these seven qualities, the first letter of each one spells out the word P-R-A-I-S-E-S and resonates with the writer of Proverbs 31:29: “He (her husband) praises her, ‘Many women do noble things, but you surpass them all.’”

Imagine with me for a moment. Think ahead 20, 40, 60 years. What do you see? Your marriage is becoming what it is going to be – and so much depends on you. No, building a wonderful marriage cannot be achieved by one person alone. It takes two. I take that back. It takes three: a woman who’s committed to becoming the woman of her man’s dreams, God, who longs to give her the power and creativity to do so, and a man who clings tightly to both.