Recently, my daughter and I were looking at some pictures of a trip we made to one of our favorite getaways. We love it because there’s great shopping (which is absolutely necessary-haha), beautiful beaches and unbelievable sunsets. It’s funny because even though we live in a place that gets really hot, in our minds, the sun seems to shine perfectly there. And there’s something about the sunshine that just makes us feel good.

Speaking of sunshine, I recently read an email that spoke of a little boy who would sing to his unborn sister while she was still in his mommy’s tummy. He would sing, “You are my sunshine.” This was a regular practice of the three-year-old and oh how he was looking forward to the arrival of his new baby sister.

That day soon came to pass. While labor started out normal, along the way, distress came. The infant’s life was in danger. It was inevitable the baby had to be taken by emergency C-section. The trauma for the little girl was too severe. It wasn’t long before the doctor told the parents their baby daughter had little chance of surviving.

You can imagine the despair. Never in their wildest dreams did they think this would happen. They had decorated a beautiful nursery for the new baby and now, sadly, they were preparing themselves for her funeral.

The little boy, unaware of his sister’s condition, told his mom, “I want to sing to my sister.” The mother knew no children were allowed in the intensive care unit and for a while, she brushed him off. But she soon realized this might be the only time he would ever see his little sister alive. She knew it was imperative that she somehow get him in to see his baby sister.

While the head nurse looked the other way, the mother hurriedly brought the little boy into the neo-natal ICU. The nurse saw him and abruptly said, “Get that child out of here. Children are not allowed in this unit!” Something rose up in this soft-spoken mother and she sternly said, “He needs to sing to his sister.”

When the little boy saw his sister hooked to all of the machines, you could tell he was taken back. But after a few seconds, he simply began to sing, “You are my sunshine, my only sunshine.” The innocent tone of the three-year-old was overwhelmingly heavenly. The baby began to respond. “Keep singing, son,” the mother said. “You make me happy when skies are gray.” The baby’s hurried breathing noticeably slowed down and became peaceful. “Keep singing, Michael,” the teary-eyed mother spoke softly. He continued, “Please don’t take my sunshine away.”

Clear on the other side of the intensive care unit, the head nurse was wiping tears from her eyes as she watched the helpless newborn breathe at a normal pace and become astonishingly peaceful. The sound of the little boy’s voice brought such healing to a helpless little baby girl.

I love that story. It reminds me though of just how many people, like Michael’s sister, are walking around in the midst of the “intensive care unit” of life.

My heart goes out to these people. I like to look at it like this; that could be me, that could be my family, my loved one. When you see it from this viewpoint, it changes your whole perspective.

Have you ever thought You might be the one person who can make a remarkable difference in someone’s life?

I know it’s easy to look at someone and pick out all of their faults and failures. But the truth is, people don’t need us to tell them how wrong they are or how many mistakes they have made. They already know. They need to be reminded their life still matters and has a purpose. They need someone to believe in them and cheer them on. When they can’t find the sunshine, they need someone to BE the sunshine.

Audrey Hepburn summed it up so eloquently when she said, “People, even more than things, have to be restored, renewed, revived, reclaimed, and redeemed; never throw out anyone.”

Today you have 1,440 minutes. That means you have 1,440 opportunities to make a positive impact. Be a difference maker, a lifter, a hope dealer… a life giver.

And let somebody know that no matter how dark it might be right now, the sun will always shine again. 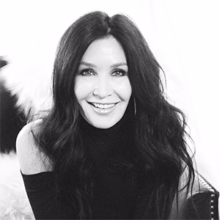 If there’s one word to describe April it is “Encourager.” In a world filled with negativity and hopelessness, she brings an inspiring message of hope and life that helps you deal with the demands and challenges of everyday living.
She inspires with entertaining stories combined with heart-warming humor and practical wisdom. Her message will impact your personal, spiritual and professional life.
April comes from a family of encouragers; her late father, Pastor John Osteen and her mother, Dodie, pastored Lakewood Church in Houston, Texas for over 40 years and spent their lives encouraging and inspiring people with the Good News of the Gospel. Her brother, Joel, along with her mom and brother and sister, continue the work of her father, encouraging millions daily through television. April travels extensively sharing a message that is relatable, insightful and life-changing. Her audiences include churches, conferences, hope-coaching seminars and business/success events all over the United States. Whatever the venue, her passion is to breathe life and encouragement into people everywhere.
April lives in Dallas, Texas. She has five amazing kids; Christiana, Garrison and his beautiful wife, Franchesca, Savannah, Elliana and Arriella. Her newest addition is her perfectly beautiful granddaughter, Penelope. April loves life, she loves her family and she loves shoes!
Be sure and connect with April on her blog, Facebook, and Instagram for more encouragement!