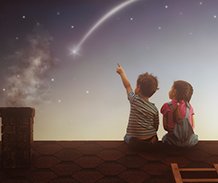 Are You Looking Back In Time?
by Hannah Keeley

My family loves to watch science documentaries. Yeah, I know…pretty weird. But the other day, we were watching a documentary on stars and the host was talking about how it takes millions of years for the light from some stars to travel through space and reach the earth. By the time it reaches the earth, the star that gave off that light may not even exist anymore! Isn’t that crazy? When you look up into the sky and see those stars, you’re actually seeing an image of what those stars were like millions of years in the past. Pretty mind blowing, right?

As I was thinking about that, God spoke to me. He said…

“Some of my children are like that. They are focusing on things that no longer even exist. All they are seeing is an image of what once was.”

If you are haunted by your past, I want to speak healing to you today. You may be all caught up in who you once were or things you once did. Ghosts from your past won’t leave you alone. And those voices keep scolding you, “Remember when you did that? Shame on you!”

But here’s the truth. If you have confessed those sins and repented from then, then they’re gone! Done! Finished! God is faithful and just to forgive you. And when he forgives you, it’s not like He just covers them up and gets them out of the way. He erases them forever! If you walked up to God Almighty and said, “God, remember when I did that terrible thing?” God would just scratch His head and say, “Nope, I have no idea what you’re talking about.”

When you focus on them, it’s like looking at images of things that no longer even exist—kind of like seeing stars that aren’t really there! All you’re seeing is an image. It’s not real. But the devil will do his best to get you to believe they still are. He’ll speak lies to you and get you to feel guilty of something that no longer even exists. God has cleansed you from ALL unrighteousness, not SOME unrighteousness.

Feeling guilty and carrying around that burden means you’re trying to pay a price for sin. Well, Jesus already did that. He already paid the price for every sin you’ve ever committed and will ever commit. It’s done. Confess, repent, and then walk in the freedom of forgiveness. When Jesus said, “It is finished,” He meant it. You can’t add anything to what He already did. It’s been paid for; so let it go and enjoy the abundant life He created you to live. Quit looking at the past that no longer exists, and start living a future that’s waiting to be created!

Hannah Keeley was once in overwhelmed mom living in a cluttered house, deep in debt, out of shape, and barely hanging on. But one day, after finding herself sobbing uncontrollably into a pile of clean laundry, she realized God has bigger and better plans for her (just like He does for each one of His children). Beginning that day, she began making changes in her life that took her from overwhelmed to overjoyed. Today, she’s helping moms do the same. Hannah, her husband, Blair, and their seven children live in Richmond, Virginia, and are having the time of their lives!
Check out Hannah’s Website Here!