Are You Eating Your Feelings? 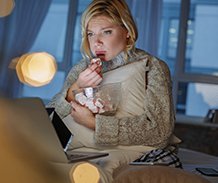 Are You Eating Your Feelings?

I hit a few stumbling blocks last week and it really got me thinking about what motivates me to eat a certain way. I was frustrated with myself about some poor choices I had made (that weren’t food related) and I found myself eating some two-bite brownies. The weird thing is, I don’t even particularly like brownies. They’re not even in my top 5 list of off plan foods I adore ya know? They were just there and I was feeling discouraged and it was apparently a recipe for disaster.

What I found was…

That I wouldn’t normally be tempted by those brownies. In the past I would just politely decline and that would be the end of it. The reason why I ate three in a row, and then another three for good measure, was because I was feeling down about myself. It really took me down a path of self-discovery to be honest with you. I realized that the worse I felt about myself, the easier it was to treat myself badly by eating things I knew were terrible for me. This is a pattern I’ve seen in my life and I wonder if it’s in yours too.

When you find yourself gorging on junk that you don’t even like that much you may be doing this to yourself on purpose. When you are eating with an attitude of “oh who cares, I may as well punish myself” then you may be actually self sabotaging yourself because you feel you don’t deserve to be healthy or at goal weight. It can be challenging to find the trigger but it may be worth it to really examine what motivates your eating habits.

Ask yourself if you’re eating your feelings in an attempt to drown out your sorrow or frustration and if deep down you’re angry with yourself. I had to forgive myself for my choices and once I did, I found that the brownies went right back to being as unappealing as ever. There they sit on my kitchen counter and I could care less whereas last week I kept feeling drawn to them. If your eating is fueled by anger towards yourself then the first thing I would suggest doing is forgiving yourself. You are not perfect, you were never meant to be. If the creator of the universe can forgive you, then please forgive yourself too.