Are You Easily Distracted? 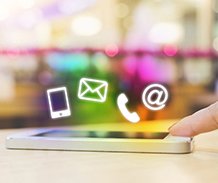 Are You Easily Distracted?

My dog, Oscar, is so easily distracted. No matter where you are or what you’re doing, if you say the word, “squirrel,” his ears perk up and he runs to the nearest window. And he isn’t the only one with a distraction problem. In today’s world, it’s more difficult than ever to keep your focus. With social media alone there are a million things out there vying for our attention. So, how do we avoid the attraction of distraction?

I learned this lesson the other day when I was…

…out walking. As I was huffing and puffing down the road, I saw a man on the road ahead walking toward me with two dogs on a leash. As we got closer, I heard him say to his dogs, “Leave it!”

Whoa! Was I the “it?” For real? You’re referring to me as an “it?” Maybe I had just heard him wrong. His dogs began looking in my direction and pulling at the leash to come toward me. He then said it again,

Although this time, he said it much more emphatically. Yes, I guess I was the “it” he was referring to. How demoralizing! But, apparently, it worked! His dogs stopped, sat down, and waited patiently for me to pass them by. I could see the longing in their eyes as they stared in my direction. They wanted to come over to “it” so badly! But, they were obedient and stayed on target. Let me just insert here that it was awkward for all of us. It was awkward for me to be tagged “it”. It was awkward for the dogs to sit and wait. And, I’m hoping it was a bit awkward for the man; but maybe not.

Aside from being an “it,” here’s the lesson I learned:

We NEVER stop being attracted to distraction! We were wired that way. And for many of us, we’re wired very heavily that way! But God knows that and He’s always willing to meet us right where we are.

Proverbs 4: 25-27 tells us, “Let your eyes look right on [with fixed purpose], and let your gaze be straight before you. Consider well the path of your feet, and let all your ways be established and ordered aright. Turn not aside to the right hand or to the left; remove your foot from evil.”

We’ll always have “squirrels” and distractions in our lives. The important thing is not so much how to eliminate distraction, but how to be obedient when it surfaces. God commands us to look right on with fixed purpose and do not turn aside to the right or the left. This is FOCUS, Mama! Those dogs were obedient to their master and they left “it” alone! No matter what the distraction, call it for what it is, and turn away from it. As you grow in your obedience to God and develop this self-control, you will get better and better at it.

Just remember this one phrase when you’re tempted to grab your phone or leave your chore, or whatever the distraction-of-the-moment may be: LEAVE IT!