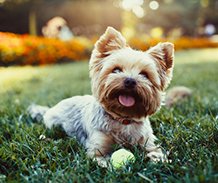 A Life Lesson From My Dog
by Hannah Keeley

It’s not often you get a life lesson from a dog with an inferiority complex. I take our Yorkie, Oscar, on a walk every evening. Without fail, we go past this one house where this teeny, weeny dog barks at Oscar like crazy. He’s always behind this wooden fence and sticks his head out to bark the entire time we walk past. Oscar does his best to just ignore him. I just assume he’s angry because he’s so tiny (not that Oscar is any behemoth by any means!).
Then, two days ago, I was taking Oscar on his routine walk, when lo and behold, that teeny dog was standing in his front yard, outside of the fence, sniffing the grass. He didn’t see us passing until we were almost right up on him. He lifted his head, saw us walking past, and immediately started barking and running.
But, here’s the kicker…

He was running away from us!
That teeny dog with an inferiority complex started freaking out. He didn’t have any big fence to hide behind, so immediately went into panic mode. He ran to the front porch, and stopped right by the front door, barking so hard I thought he was going to tear a vocal chord! Then, like always, we just walked right past, totally ignoring him (but, I have to admit, I did walk a little slower in front of that house).
If you didn’t already know it, you are under attack! Satan wants nothing more than to keep you fearful, overwhelmed, stressed out, angry, and out of control. The Bible even tells us in John 10:10 that his goal is to “steal, kill, and destroy” you! And he does it by hiding behind his fence of lies!

Want to learn how to disarm the devil? Catch him in the act! He is called the “father of lies” because he has mastered the art of using that weapon. If he can get you to believe his lies, then he has you defeated. Here’s the deal. If you are a born-again believer in Jesus Christ, the devil can’t touch you. But, he is perfectly able to get you to destroy yourself. And he does that by barking out his vicious lies.How many of these lies have you ever been suckered into believing?

You’ll never succeed. You’re not one of the lucky ones!

This marriage will never work out. Just give up already!
Teens are rebellious; that’s just all there is to it.
You just can’t get ahead in this economy. It’s impossible!
You’ll never lose that weight. Just deal with it.
You will never be able to pay off all that debt.
You’re going to have that sickness forever so learn to live with it.
You’ll never rise up any higher than your family. Get over it.
Guess what–these are all lies and there are a lot more where those came from! And if you believe them, the devil has you right where he wants you.How do you combat the lies? With truth! And God’s Word is truth! Call the lie out for what it is and speak God’s Word over the situation. All of the sudden the devil doesn’t have a fence to hide behind. He panics and runs for dear life! Do you want to send the devil running? Then build up your artillery of scripture and tear down that fence of lies! That disgusting beast has a horrible inferiority complex, and it’s fun to give him a run for his money.

God’s Word says you are the head and not the tail, the top and not the bottom. He says you can do all things through Jesus Christ Who strengthens you. He says that He takes delight in prospering His servant. He says that by His stripes you ARE healed. He says all this and a lot more! But you’ll never know if you don’t dig in and find out for yourself. Dive into the God’s Word today and start claiming these truths for yourself!

It’s time to disarm the devil and tear down that fence of lies! Did this message speak to you today? Do you know someone who is being attacked with lies? Please share this message by posting it on Facebook or sending the link to someone you care about. Let’s send the devil into a panic!