10 Things Your Husband Wishes You Would Say To Him 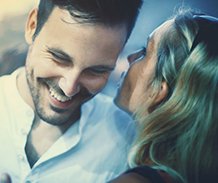 10 Things Your Husband Wishes You Would Say To Him

Admit it. There are certain words and phrases you would love to hear your husband say to you. Words of endearment. Words of affirmation. Words that imply how young, thin, and beautiful you still look. Maybe they are words you haven’t heard in a while but wish you could.

But have you ever thought about what he’d like to hear you say to him?

In Scripture, we are told “Do not let any unwholesome talk come out of your mouths, but only what is helpful for building others up according to their needs, that it may benefit those who listen (Eph. 4:29, NIV). In the Contemporary English Version, the last part of that verse reads: “help others by what you say.” And in The Message, it reads: “Say only what helps, each word a gift.”

That’s a great guideline for how to talk to our spouses. I’m sure you’ve heard that your husband needs your respect just as much as you need his love. You can convey your respect to him through your gift of words, carefully chosen and lovingly spoken.

After asking my husband – and several other husbands who have been married anywhere from 5-50 years – what phrases would be considered “gifts” from their wives, I came up with this list of the 10 things your husband wishes you would say to him. (By the way, this is the G-rated list. If you want to know his preferred pillow talk, I’ll let you get that list by asking him yourself.)

Sometimes you can show your husband you love him simply by helping him with things he can’t get to right away. By telling your husband “I’ll take care of it” you are reassuring him that what is important to him is important to you. When you let him know you’ve got it under control he will have one less thing to worry about. And that is something he will see as a gift.

Now if you are the one who manages the finances and you’re doing it well, that in itself is a gift to your husband. But don’t do like I once did and leave him feeling penny-pinched by his wife.

“Men don’t like to be money-managed by their wives,” my husband told me, drawing on his experience as a pastor, counselor, and longtime discipler of men. “Some men are responsible for large budgets and expensive projects at work and to be questioned at home by their wives over finances can feel belittling.” Another man told me “If they have a good track record of being responsible with money, men need the freedom sometimes to spend without an audit from their wives.”

There are days your husband does not believe he can accomplish half of what you believe he is capable of. Whether he’s doubting his ability to tackle the project in front of him, score a sale on the presentation at work, or land the promotion he is up against, he craves your confidence in him.

When you say “Go get ‘em, Tiger,” or “You can do this!” or “I believe in you” you are being his cheerleader, as well as giving him your approval and your confidence.

Women aren’t the only ones who want to be told they are attractive and, well, a knockout! Men like to know they look good, too, and that news is especially important (and crucial) coming from their wives.

Tell your husband you notice that his efforts at the gym are paying off. Let him know that he still catches your eye. Tell him often (especially the longer the two of you are together) that when you look around the room you are still glad he is the one who stole your heart.

Keep in mind, if you aren’t telling him he looks good, it’s very possible someone else eventually will and you want to always be his No. 1 cheerleader. Give him enough praise and you’ll likely decrease his desire to hear it from anyone else.

Your husband really wants to be your hero. He wants you to not only notice the risks or sacrifices he makes for his family, but he wants you to admire him for it, too.

Letting him know you are proud of him for certain things that he does, or simply for who he is, is not stroking his pride, building his ego, or making him vain. Rather, it is assuring him that his wife notices the efforts he has been making and appreciates him for it. More than just a “thank you,” saying “I’m proud of you” builds his confidence as a provider and as a man.

According to one middle-aged man and father of three, “Men always feel under pressure to perform, mostly at work. They constantly feel expectations on them from their jobs, their bosses, their schedules, their rush to meet deadlines, and so on.” Your husband may go all day with everyone around him believing their need is an emergency or a fire that he must extinguish.

Then he gets home and finds another list of expectations to meet and fires to extinguish. When you tell your husband “Why don’t you worry about this later?” you are giving him permission to let his foot off of the gas pedal and not take another step toward becoming a workaholic. Give him permission to rest and enjoy the fruit of his labors. Many times he’s waiting for you to invite him to take that much-needed intermission.

Sometimes it’s not enough for your man to be told he did a “good” job. He wants to know he did a great job. “That was amazing!” is something he wants to hear from you in any number of circumstances – his play on the sports field or his “performance” in the gym, his well-stated definition of a term that no one else knew, the way he handled a disciplinary matter with the kids, or how he expressed his opinion in front of others or defended you when you needed it most.

Yes, he wants to hear it in the bedroom too, and in the garage when he’s fixed something, and in the bathroom when he’s unclogged a toilet. There is a competitive nature in your husband. When he knows you believe he’s the best – or at least “amazing” – he will walk a little taller.

Men need meaningful time spent with other men, which is how they forge their friendships and establish new ones. But some husbands feel asking their wives for time with the guys will hurt their wives’ feelings or even worse, raise suspicions about their motives.

The last thing your husband wants to say to you is “Honey, can I please go bowling with the guys tonight?” or “Can I go hunting this weekend with my brother?” And the last thing he wants to hear from you is “When will you be home?” or “Do you think it’s safe?” or “I’m afraid you might get hurt.” Don’t mother, smother or hover. Let him retain his dignity and independence by letting him know you want him to have a good time.

There’s a reason the Nike slogan “Just do it!” resonates with men. When you tell your husband “Have a great time” or “Just go do it!” he will appreciate the challenge and knowing that every decision he makes doesn’t have to be approved by his wife.

Let your husband know, especially at times when he feels he’s blown it, that you still need him and you’d still choose him if you had to do it all over again. It’s one small way you can show God’s unconditional love to him when he needs it most.

Sometimes your husband just needs to know that his wife is on his side through thick or thin, good times or bad. Even if he makes a poor decision, he doesn’t need the added accusations and condemnation. Most men know when they screw up – their supervisors/managers/bosses at work do a pretty good job of reminding them of that, so a husband knows what that feels like, too. When you let him know the two of you will get through whatever lies ahead you are reminding him that you are on his team, you’re in his court, and you’ve got his back.

This phrase “We’ll get through this” or “I’ve got your back” is especially what your husband needs to hear when he tells you about something that concerns him or something he’s struggling with. (Do you know why men don’t often open up and talk with their wives about what causes them to struggle? They aren’t sure how their wives will respond.) Encourage your husband to be open and honest with you by letting him know that regardless of what he struggles with, regardless of how he thinks he doesn’t measure up, regardless of how much he believes he’s failing or is going to fail, you are going through this with him and you’ve got his back.”

Cindi McMenamin is a pastor’s wife, national speaker, and award-winning writer who helps women and couples strengthen their relationship with God and with each other. She is the author of 16 books, including When a Woman Inspires Her Husband: Understanding and Affirming the Man in Your Life, and When Couples Walk Together: 31 Days to a Closer Connection, which she co-authored with her husband, Hugh. Her newest book, 12 Ways to Experience More with Your Husband, is now available. Grab it at a special introductory price at her website: www.StrengthForTheSoul.com.